I’m a proud member of the Oregon Trail Generation, a subset of the Millennials defined by, among other things, a fond memory of the game The Oregon Trail from my time in the computer lab at school. This game wasn’t just great for teaching kids how to use computers though. If you were paying attention, you picked up some awesome lessons about money and real life.

For those of you not familiar, The Oregon Trail is a game in which you led a family on a cross-country wagon trip in the 1840’s, hoping to survive all the perils and struggles between the central United States to Oregon.

The game taught historical concepts from this time period and served as a fun way to get kids interested in computers and technology.

There are lots of versions of the game that have come out over the years. If you’ve got 30 minutes to kill, you can play one of these online:

Hopefully that didn’t divert you for too long :)

I’ve been wanting to write a post on this for a while and, thanks to some encouragement from some blogger friends on the new Rockstar Finance Forums (Thanks Ms. Montana, J. Money, and Mystery Money Man!), I’m ready to share some of the most important lessons I learned from The Oregon Trail. 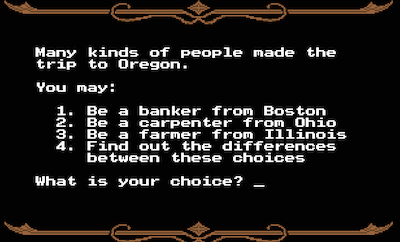 One of the first steps The Oregon Trail is choose your profession. Do you want to be a banker and use your loads of cash to fund the trip? Maybe it’s more fun to be a farmer and try to scrap your way through.

With enough money, you can afford a full team of oxen, a wagon full of food, plenty of clothes, spare parts, and an army’s worth of bullets.

Things are a whole lot easier; many of the situations in the game didn’t really affect you because you could just get around them with money.

If you were a teacher or a farmer, on the other hand, you have just enough to get on the road, but will have to work a whole lot harder to make it through.

In both the game and in real life, income does matter.

If you’ve got a high income or were fortunate enough to start adulthood with decent financial footing, it’s certainly easier make progress toward your goals.

With the average household paying a total of $6,658 in interest per year, it’s clear that living debt free is a huge financial advantage over a lifetime.

Having a higher income or starting debt free is a huge advantage in the game of life.

It’s not that easy, but you do have power to do something about it.

Self-Provision to Make Up for Income 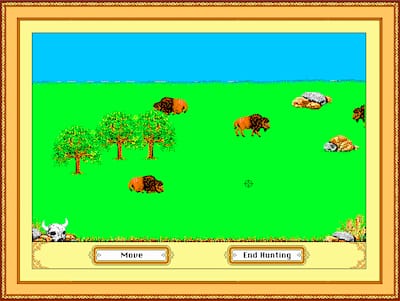 For those of us that spent countless hours figuring out how to optimize our odds of making it in The Oregon Trail, one thing was clear:

If you can’t afford food, you’d better buy lots of bullets and go hunt some bison (Tweet this )

The key to making it through the game without much money was finding an alternate source of food - hunting for it yourself.

Hunting was probably one of the more fun parts of the game and was your best shot if you tried to make it with a lower-wage profession.

In real life, this translates to a couple of things:

First, watch what you spend.

Going on the Oregon trail with 50 sets of clothing but only 2 oxen is a recipe for failure.

What you earn is important, but when you’re limited in income, it’s even more important to make sure that every dollar is allocated carefully.

If you’re looking for a way to track your spending, check out my income/expense/tax tracking tool, Thrifty

Second, get things cheaper by self-provisioning and doing-it-yourself.

Plant a garden in your backyard or change your own oil. You can save a ton of money and have fun in the process.

Don’t Get Greedy - Be Judicious 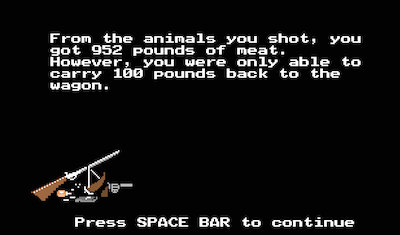 Hunting is one of the keys to making it through the game, but everyone inevitably ran into one frustrating scenario.

You could hunt as much food as you wanted, but there was a limit to how much you could bring back to the wagons in a single hunting trip.

There’s no sense in shooting 6 bison if you can’t even carry back the meat from one. It’s a waste of bullets and scares the food away for the next hunt.

How does this apply to real life today? Let me ask you some questions?

If you had $1 million dollars right now, would you be happier? Would $10 million make you much happier? What about $100 million or $1 billion?

The answers are all probably yes, but the strength of those yesses goes down each time the number goes higher.

The first million is a big deal. Ten million generates more than enough interest for anyone to live an extravagant lifestyle. Once you get up to $100 million or $1 billion, you’ve hit a ceiling.

Once you’ve got enough to cover your reasonable expenses, the extra money is more likely to be a stressor than a help.

Don’t make your life’s goal to be the collection of money.

Plan Ahead - Save for Risks 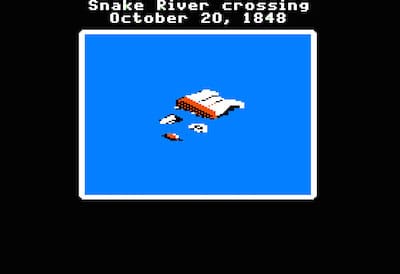 Do you ford the river or caulk it and float across?

I have to admit, without this game, I’d have no idea what those terms mean :)

In short, when you encounter a river, you can either try to roll through it or float across like a raft. The problem is that both have a shot of drowning your oxen, losing your supplies, and even drowning members of your party.

It’s painful to go through the whole game just to lose when your wagon tips over in the river.

Thankfully, you can usually hire someone to help you cross - it just costs a few sets of clothes or a few dollars.

In order to be able to do this though, you have to plan ahead. Setting aside $10 and a few sets of clothes at the beginning certainly smooths out some of the riskiest portions of the trip.

Life is going to present you with unexpected rivers you need to cross and it pays to have an emergency fund set up to help you cross them.

Build up a safety net for yourself so you can have some financial continuity when things get rough.

If you want some help, check out this article from Ms. Montana for some good pointers on how big your emergency fund should be

Take Care of Yourself - And Others 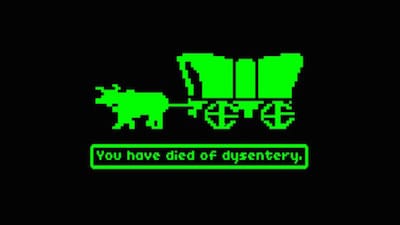 If you played The Oregon Trail as a kid, then you know what it’s like to die of dysentery. Not literally of course, but this way of losing was about the worst.

On the trail, you try to manage the pace at which you and your family move as well as the rationing of food. These influenced the health of your party members and could lead to disastrous results.

In the end, when Sally gets a snakebite or John has has cholera, you need to rest and take care of them.

With all the hustle and bustle around us, it’s important to recognize that sometimes we need to slow down and take care of ourselves and those around us.

We’re terrible at this. One in three adults doesn’t get enough sleep; while 10% of the workforce works 59+ hours a week.

We keep working more hours and foregoing sleep to fit everything in, but this is a classic case of working “harder” instead of working “smarter”.

After working 60 hours per week for eight weeks, “the fall-off in productivity is so marked that the average team would have gotten just as much done and been better off if they’d just stuck to a 40-hour week all along”

Getting a good night’s sleep and managing your work schedule to a reasonable level is better for your health, your productivity, and your relationship with your family and friends.

Take time for yourself - invest in yourself - and invest in the health of your family members (physically, spiritually, mentally).

After all, Wouldn’t you rather get to the Willamette Valley with your friends and family by your side? (Tweet this )

You Can’t Control Everything

Perhaps the most important lesson from The Oregon Trail is that no amount of preparation, planning, or meticulous management of your wagon party guarantees success.

Life is bound to throw you curveballs; it’s healthy to acknowledge you aren’t always in control (Tweet this )

I’ve found the serenity prayer to be a great way to maintain the right outlook through these challenging situations:

God, grant me the serenity to accept the things I cannot change,

Courage to change the things I can,

And wisdom to know the difference.

Whenever you find yourself in a situation where there are simply things beyond your control, give yourself some grace; you can’t control everything!

Then look for what you can have an effect on and have the courage to act on those instead.

If you feel like you get into a state where there’s nothing you can control, I’ll leave you with this quote from Victor Frankl:

Everything can be taken from a man but one thing: the last of the human freedoms—to choose one’s attitude in any given set of circumstances, to choose one’s own way.

No matter what you find out there that you can’t control, you can control your attitude.

What Did You Learn?

That ended on a pretty deep note. Not sure that’s what the creators of the game had in mind when they first put it out in the 1970’s :)

Regardless, it’s a fantastic game and well worth spending a half hour to try out.

I also recommend you check out I, Vigilante’s awesome thoughts on what you can learn from some other popular video games (though these were more from middle and high school for me)

If you’ve played The Oregon Trail, maybe you had your own set of lessons. Share your takeaways here - I’d love to hear what you learned!