You can hardly open your eyes these days without being bombarded by advertisements. By some estimates, we are exposed to around 3500 advertisements every day. In a world that’s constantly telling you that you need to spend more, the best defense is to understand the tactics marketers use and immunize yourself against them.

While many marketing ploys are obvious, there are some that are so nuanced that you might miss if you’re not paying attention. Here are four of the most devious tactics marketers use against you and some tips on how to retool your thinking to avoid them.

This underhanded approach is often targeted at kids. Here’s the marketer’s formula:

As a child, I got hooked by this tactic with Magic: The Gathering cards. I spent hundreds of dollars trying to get the “powerful” rare cards. Yes, I was (and still am) a huge nerd.

Every time I bought a pack of cards, I felt a rush of nervousness and excitement as I was about to open them. After opening the pack, I’d quickly scan through to see which ones I got. Things invariably went like this:

The feeling of excitement would turn to disappointment and I’d rush to buy another pack. Every once in a while I’d get lucky, get a rare card, and be flying on cloud nine.

There have been lots of examples of artificial scarcity over the years but the latest one really gets under my skin: Shopkins

Primarily geared toward young girls, the Shopkins are tiny molded plastic figures centered around the exciting world of shopping. I can’t get onboard with a product whose slogan is “Once you shop, you can’t stop.” Throw in a little artificial scarcity and you’ve got both a hit product and a headache for frugal parents.

It’s not just kids either - some adults pay a crazy amount of money for a “rare” piece of cheap plastic: you can get this one for the low, low price of $5,000.

Your Defense: If you’re buying something known to be “rare” or “uncommon”, dig in to understand whether that scarcity is real (i.e. heart-shaped rocks found in nature, coins from the 18th century) or artificial. Artificial scarcity exists for the sole purpose of getting you to pay more - don’t fall for it.

This one is best exposed by looking at an example. Here’s a recent one I ran across:

At first glance, this seems pretty innocent. A loving mother and father want what’s best for their children. So, they invest in their kids’ future by buying a house with a 30-year mortgage.

That all makes sense, right? Not so fast.

The couple in the ad are uncertain about the next few months, but they decided to make a 30-year financial commitment anyway…for several hundred thousand dollars…for their kids?

Who invented this line of logic? Can anyone honestly state whether renting or buying is better for your kids? Is this factual?

This isn’t a fact; it’s a suggestion intended to make you feel an obligation. Here’s an actual fact: plenty of perfectly awesome people are raised in rented housing :)

Keep in mind, the ones suggesting that buying with a mortgage is better for your kids are from…a mortgage company.

Don’t ask a barber if you need a haircut

Your Defense: Pay attention to your emotions when making a purchase. What are you feeling? Why are you feeling that way? Do the facts about this purchase support that feeling, or are you feeling something based on a message that’s been put in front of you?

What better way to get someone to do something than promise them results that are unachievable? Snake Oil salesmen have been doing this for years. Sadly, this tactic is still very much present today.

Here’s an example, I ran into. I don’t get lunch out often, but the last time I was at Taco Bell, this is what I saw in the drive-through: 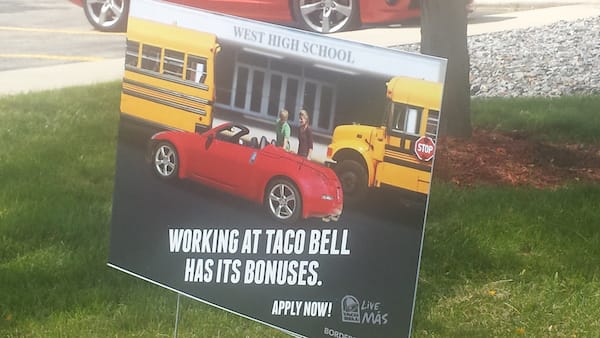 Do you want to become a Taco-Billionaire?

That’s right high-school students; you too can own a convertible by working part-time at Taco Bell!

I’m just questioning whether a high-school employee at Taco Bell can reasonably make enough to buy a convertible.

@keepthrifty And then the insurance/maintenance /gas for a teenager on that car would take care of all future paychecks.

No way you’re getting a new convertible. Even a used one is going to be a stretch and the ongoing burden is going to drain every paycheck going forward.

Is the image portrayed in that poster reasonable? No, it’s an overpromise.

Your Defense: Whether you’re taking a new job or buying a miracle solution make sure you do your homework first. Do the math, and get referrals from others who have already tried it. Living in the “age of information” has the benefit that there’s a lot more info out there. Take advantage of it!

The final devious tactic may be the toughest to spot. Defending against it requires critical analysis, research, and a dedication to questioning everything.

Once again, we’ll look at this tactic with a real-life example I encountered.

At our local big-box home improvement store, I checked out the light fixtures as we have a few ceiling lights that need to be replaced.

Based on my wife’s description of the style she was hoping to get, I had a general idea of what I was looking for and was initially pleasantly surprised with the options I found. The prices weren’t too bad, so I took a look at the boxes and something caught my eye:

At first, I wasn’t sure what they meant. Do light fixtures normally require maintenance?

The box highlighted that the LED was integrated into the fixture and came with a 50,000-hour life - no bulbs to change!

That sounds great, right? Once again, if you just take the manufacturer’s word for it, this great product will save you tons of time! By now, though, you’ve learned not to trust these messages. Let’s break this one down and validate your new gut instinct of distrust.

Many LED bulbs last the same 50,000 hours as the stated life of the no-maintenance fixture. So, after 50,000 hours of lighted bliss, both are going dark.

With a standard fixture, you can pull out the old bulb, put a new one in and you’re good to go for another 50,000 hours.

Here’s the kicker then for our no-maintenance fixture: the “feature” is actually a shortcoming. While the manufacturer states that you don’t need to replace the bulbs, that’s just another way of stating that you cannot replace the bulbs!

When the lights go out on the no-maintenance fixture, you have to replace the whole fixture.

Instead of having the option to buy a new bulb, you now have to spend extra money on a new fixture, extra time on a more complex installation, and you put extra trash in the landfill since the whole fixture is now unusable.

What was sold to you as a benefit is actually more expensive, more wasteful, and less convenient!

Your Defense: Constantly question what you’re being told by advertisers. Most companies are more concerned about your dollars than your well-being (Tweet this )

I’d be remiss if I didn’t also send you to this great post from Maggie from Northern Expenditure (hosted on FrugalToFree) about how to combat the effect of “Anchor Pricing”. Maggie does an awesome job giving you the behavioral economics theory that drives anchor pricing and guides you on how to beat the tactic altogether.

There you have it, folks. Those four tactics can empty your wallet if you don’t watch out for them.

There’s one core theme here: slow down and really thoughtfully consider the messages that marketers are putting in front of you.

The “facts” and assumptions behind what you’re being told are fuzzy and coming with a fair amount of bias.

Based on all of this, here’s your charter for the next time you see an advertisement: Assume nothing, question everything and, as always, keep thrifty :)

What marketing messages rub you the wrong way? Any devious tactics I missed warning people about? Join the conversation below!