Let’s play a game. I’m going to give you a word and I want you to think about how that word makes you feel. No planning out what you’ll say - just note the first feeling you can identify.

Ok, are you ready?

What did you come up with?

I put this out as a poll on Twitter with a few options and here’s what came back: 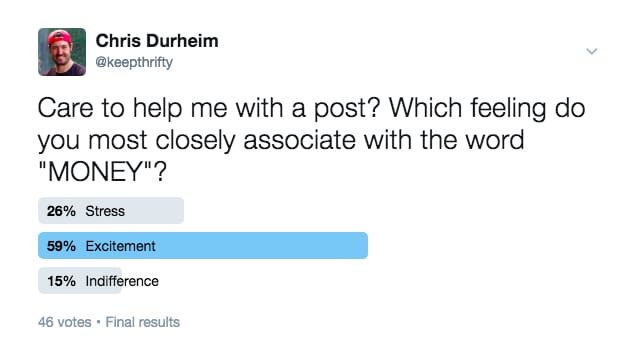 Where do you fall in? Where would you like to be?

Let’s take a look at these three money feelings as phases in your financial journey.

According to a survey by the American Psychological Association, 61 percent of Americans cite money as a very significant or somewhat significant source of stress in their lives. Thirty-five percent of couples experiencing relationship stress said money was the primary cause according to another survey.

Let’s put it bluntly: money stress is a destroyer of marriages, health, and happiness.

The obvious source of money stress is feeling like you don’t have enough. That said, things can go quite a bit deeper than that.

Early on in my life, money was a huge stressor - even when it came to finally buying something I had been saving up for. In our first few years of marriage, I stressed about not saving enough even though I was taking full advantage of my retirement savings incentives at work.

I wasn’t loaded, but I wasn’t short of money either - and yet money was still a huge stressor in my life. Why? Because I wanted to be in control - I wanted freedom and I viewed money (or lack thereof) as a barrier to being free.

How to Move Beyond Money Stress

The best way to gain control is to improve your knowledge. In this case, there are three major things you need to learn in order to move beyond the money stress phase:

Once you know these three things and start acting on them, you’ll find that stress starts to fade (though it won’t necessarily disappear completely) and that excitement starts to come to the forefront.

This is the phase where things really start clicking. You have a solid grasp of what money is, how to manage it and you’re starting to see the fruits of your labor. Your account balances are increasing and the feeling of being in more control can be downright intoxicating.

Awesome! Wait, why is this only phase two? Shouldn’t this be where I’m trying to end up?

Not quite. It’s great to get out of the money stress phase, but money excitement can be just as dangerous.

The biggest risk of money excitement is viewing money as the goal instead of a goal enabler.

How many people are financially successful in every sense of the word and yet can’t seem to find an amount of money that would qualify as “enough”? How many people spend too much time in cars to drive to jobs they don’t like and work too many hours, all in the pursuit of the next level of affluence?

Let’s look at this another way - if you had a huge windfall come your way tomorrow, what would you do? If your answer starts with “I’d buy…”, you may want to pause and reconsider.

The stuff you can buy is a short-term outcome. If you’re looking for long-term, sustained fulfillment and happiness, you’re probably not going to find it in a Porsche.

The real question is what lifestyle would you make for yourself? What would you do to find fulfillment? How would you spend your time?

If you can figure out the answers to these, you’ll be able to redirect your excitement from money to something more important - to living out your dreams.

In either case, money is inappropriately taking center stage. Instead, refocus on what would be important for you if money weren’t a consideration

With that in mind, the ultimate goal for money feelings is achieving money indifference.

The ultimate state we can hope to achieve is to eliminate money as a factor in our decision-making.

Imagine the freedom of turning down the huge promotion that comes with a fat pay raise but an expectation of 24/7 availability and a lot of travel. Imagine giving both your time and money generously to the causes you believe in.

When you can become hyper-focused on what you hope to do during your 85-or-so orbits around the sun, you can start to view money for what it really is - a tool to help you accomplish something bigger.

To be clear, this stage is full of excitement - it’s just not excitement about money. The excitement here is about being in a stage of life where money acts only as a tool to support your goals - not as a goal itself.

If I can get to the point that money is only serving to support my family in accomplishing our goals, living in our values, and making an impact on the world around us, I’ll consider this all a success.

How does money make you feel? Are you where you’d like to be? Do you see how to get where you want to go?