I’m so excited to have Ellen from Uncommon Dream share her family’s Financial Independence story! It’s amazing the dreams you can accomplish when you live frugally!

Michael and I have always lived on the frugal side of life. We chose to buy a low cost home close to work, paying off our mortgage in two years. We even sold one of our vehicles (keeping a single old paid off car) and traveled by foot or bike as much as possible.

We’ve always worked hard and found ways to have fun without spending a lot of money. We would take our sweet dog for hikes, have friends over for game night, travel to visit family a few times a year, and stay up too late binge watching shows like The Wire or Breaking Bad.

Living frugally allowed us to live off my teacher salary (even after fully investing in my 403b) and invest Michael’s salary into index funds at Vanguard. Michael was really excited to see our projected retirement date as we saved his income. He would spend hours working on a spreadsheet he created and then pull me over to update me on our progress. This helped me get on board with the financial independence thing and showed me how high spending months impacted our projected date.

After seven years of marriage and living frugally, we achieved financial independence. We were both happy with our jobs, and had a baby on the way; so we decided to keep working and saving. Once we welcomed our son into our arms, our focus started to shift more toward parenthood. We found ourselves questioning our current lifestyle and talking about how we wanted to raise our family.

To Move Or Not To Move 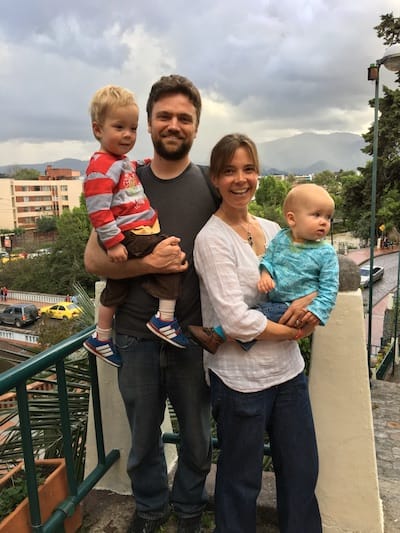 We were living in the suburbs of Dallas, Texas. While it’s a great place for many people, it just wasn’t for us. We had moved there from Olympia, Washington for Michael’s work with the plan to stay 2-3 years. We would often talk about where we wanted to move to next, where to put down roots. We’d be out walking our dog at 10pm, sweating in the summer heat, and go back and forth between moving back to Washington (where Michael wanted to go) and Baltimore (close to my brother). We just couldn’t come to an agreement.

One weekend we took a little getaway to a cabin overlooking the Palo Duro Canyon in West Texas. We worked together on our five year plan and had something of an epiphany. COLORADO!

If we moved to Colorado, we could be in a beautiful area with a lot of other family perks:

It’s one thing to make a decision, it’s another to make the move. Despite settling on Colorado as our destination sometime in 2012, we didn’t get there until 2016. I became pregnant with our second child and we realized that moving would need to happen now or not for a few years.

While a good friend of ours was visiting over Thanksgiving, we took my one year old to the park and brainstormed over our lives. She was looking to move from New York out west for a change of pace. Michael and I were hesitant to leave Texas and our support system right before having our second child. Our talk resulted in a whirlwind of a plan:

Michael and I would buy a house in Colorado a couple months before my due date, and she would move in with us for a few months, helping us make the transition to a two kid household.

I drove home pretty giddy to share our thinking with Michael, but we didn’t take the leap right away. There were a lot of back and forth moments. One week we’d tell ourselves no, that’s crazy! Other weeks we’d decide we were going to do it no matter what. Ultimately, we felt very strongly about moving before our daughter was born.

We flew out to Colorado in January 2016 and bought a house that weekend (we were very lucky). Our house in Texas sold within 24 hours and above our asking price. By the first week in March we were moved into our new home in Colorado. Our daughter was born exactly two months later!

Leaving our life in Texas came with another change. We decided to take advantage of the financial independence we had gained before our kids were born. We started co-parenting full time while working on passion projects on the side (such as FI Clubs).

Michael finds himself working about 70 hours a month (this happens to cover our expenses and allows us to continue saving). This allowed us a lot of flexibility in our life and we started talking about the things we wanted to do when we both “retired”. We had always dreamed of traveling abroad again.

But, yikes, we now have two very young kids! Who travels with little kids? As it turns out, we do. 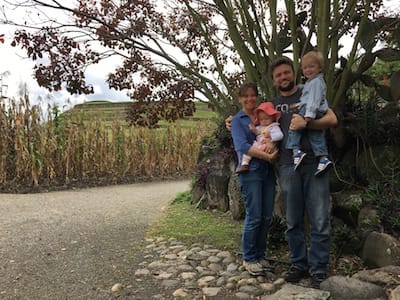 Michael and I met at a language school in Mexico back in 2004. We both speak Spanish and would love for our children to acquire some authentic bilingual skills as well. With that in mind, we spent a lot of time deliberating on where to travel.

Michael had used a site called TheEarthAwaits.com to find the safest, cleanest, most affordable Spanish-speaking locations to choose from. We eventually decided on Cuenca, Ecuador.

We put our house up on AirBnB, and spent an awesome three months in Ecuador during the winter of 2017. We met some really wonderful people during that time and decided to return to Cuenca for the winter for 2018. Our lifestyle there was really pretty normal. We walked everywhere, drank beer with friends, and took short trips to beautiful parts of the country. We enrolled both of our kids in a local preschool where they were immersed with native Spanish speakers for 3-4 hours a day.

We’ve been back in Colorado for about two months now and are enjoying time in our community, working on house projects, and spending time with friends and family. Along with enjoying our time back home, we are talking about taking a longer international trip. Our friends Chad & Kari have inspired us to take a bigger leap! 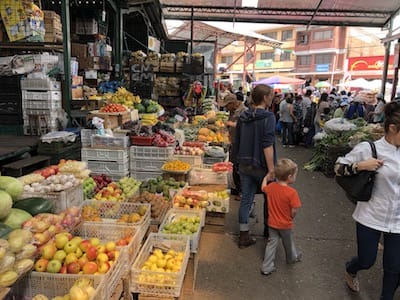 This time, we are looking at a longer stretch of time. We’re talking about slow traveling Latin America (starting in Costa Rica or maybe Colombia) for a full year and a half beginning in January. We may stay in one spot if we fall in love with it or we may try out a few different cities and countries. We’ll then return home to Colorado in time for our son to start kindergarten, enrolling him in a local bilingual elementary school that has a great reputation.

Life is still busy with balancing parenthood, doing work that fulfills us, taking care of our home, building our life in Colorado and traveling. These past two years have been full and crazy, but we wouldn’t change it for the world.

Thank you to Ellen & Michael for sharing their story with us! We love how frugality enabled you to save, become financially independent, and raise your little ones in your values! We wish you the best and can’t wait to hear more about your slow travels in the future!