So, you’ve figured out whether you’ll ever be able to retire. Now you are itching for that next step - figuring out how to retire early. After hearing all of these amazing stories of people retiring in their 30’s and 40’s, you want to know the secrets to getting there on your own.

If you’re ready to go there, I’m ready to take you through it. The trick to retiring early is beating inflation. Today we’ll go through how to do that with a one-two punch.

Let’s build a baseline scenario to understand why the combination of earning and frugality are so powerful.

A 2018 college graduate can expect an average starting salary of roughly $50,000. Using data from the Bureau of Labor Statistics’ Consumer Expenditure Survey, let’s say the average person making $50,000 is spending about $48,500. That’s a savings rate of about 3.5%.

From this point on, if Mo does an adequate job, we can expect annual raises that are roughly in line with inflation - about 2.5% each year.

While those raises might look fine on paper, they aren’t really making anything better. If Mo’s income goes up at the same rate as the cost of the stuff, Mo will be stuck at that 3.5% savings rate for the rest of time. 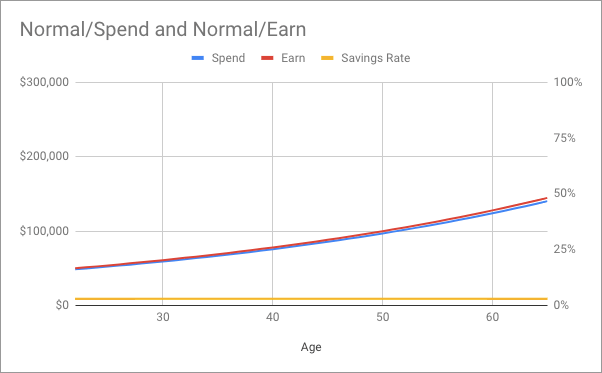 The personal finance community lovingly refers to the distance between the earning and spending lines as “the gap”. And as the experts will tell you, minding the gap is the most important money lesson you can learn.

So, we need to find a way for Mo to either increase earnings or decrease spending. In both cases, Mo is currently tied to inflation, so this is really about beating inflation.

Beating Inflation with a Frugality Punch 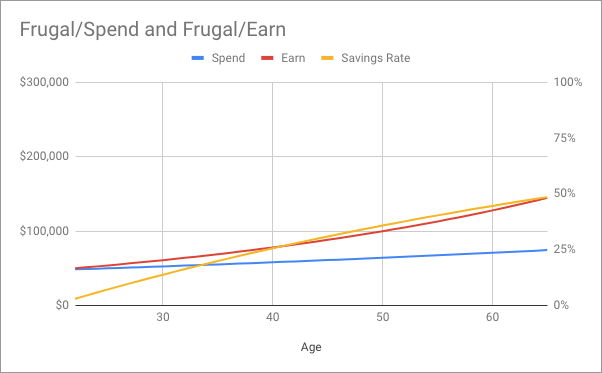 The results are staggering. The spending and earning lines move further apart from each other every year by a bigger amount. That’s a gap that’s improving by leaps and bounds.

With this one simple change, Mo could retire early at age 55 - with $1.8 million in the bank.

Beating Inflation with an Earnings Punch

What about the flip side? What if Mo can be a top performer at work and get 4% annual raises instead? 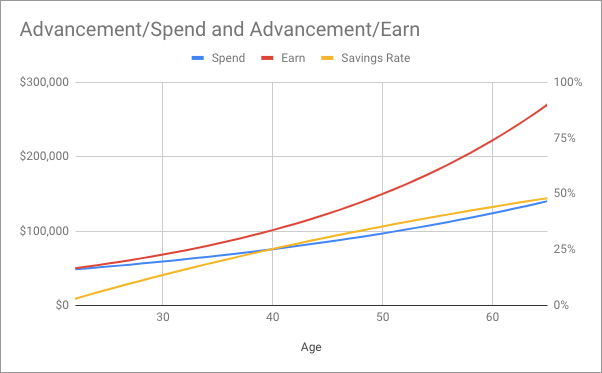 Once again, the spending and earning lines are diverging - creating an even bigger gap every year. By the time Mo reaches retirement, we’re once again seeing a savings rate of nearly 50%.

With higher earnings instead, Mo could retire early at age 58 - with $3.2 million in the bank!

Beating Inflation with a One-Two Punch

When you put the two together, the gap grows big and it grows fast. In less than four years, Mo breaks a 10% savings rate. In another four, that jumps to 20%. By retirement age, Mo’s savings rate is almost 75%!

What does a 75% savings rate mean? That means in Mo’s last year of employment, one year of earnings is buying Mo three years of retirement. That’s one heck of a ratio. 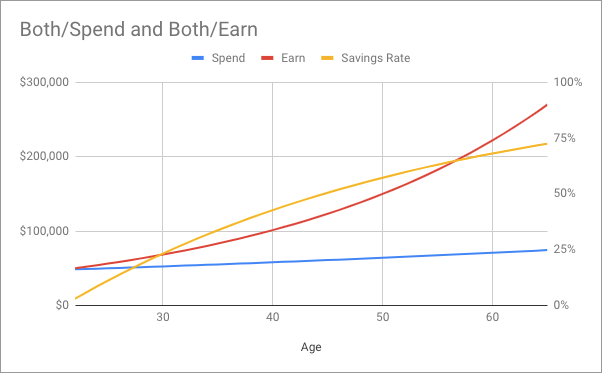 Putting these two together lets Mo retire at age 48. What do you think Mo could do with an extra 17 years of freedom?

What could you do with an extra 17 years of freedom?

Up Next - Learn to Punch

Hopefully this gave you some great motivation around beating inflation so you can improve your financial situation. Your next step? Check out our post on how exactly to beat inflation with both frugality and earnings: Earn Like a Boss, Spend Like an Intern.