We are excited to introduce you to Mohammed from LIVEDAILYMO. After a decade of working a career he didn’t love, Mohammed took the leap into mini retirement! How did he do it and what is his life like now? Mohammed shares his journey from the UK to the Philippines!

I’m from Northern England where salaries tend to be lower and people are very friendly. It’s not really a surprise if a stranger starts a conversation with you.

I was living in a small town, but commuted an hour each way into Manchester for work. This allowed me to go out with friends after work, but enjoy hiking on the weekends. I loved the people in my life (family, friends, colleagues) as well as all the activities I got to do. I believe that variety is the spice of life and in my life I truly did have that.

What was your freedom dream?

After attaining a degree in Accounting and Financial Studies, I found myself going from job to job. I knew I had more ability than I showed but continuously settled for less. I got to a point during my career where all I would do is look outside the window, wanting to be free from my concrete fishbowl.

I had traveled to the Philippines, Spain, Iceland, Denmark, and Poland in the past. I wanted the opportunity to be able to spend more time other places, not having to be in a specific place or country for work. I wanted to be out there and free. What was the catalyst to pursuing this dream?

The company I was working for sent me to the Philippines to supervise and train staff in our Manila office. During this trip I met someone special, though initially I didn’t think to pursue anything as I figured she would go for someone more attractive. Plus, we were living in different countries.

To my surprise, she was keeping an eye on me as I was training my team members. When I headed back to the UK, we ended up keeping in touch on Facebook Messenger and Skype. Four months later, I took a two week holiday back to the Philippines.

When I returned back home after the holiday, I couldn’t settle back into work. I felt like I wasn’t going anywhere with my career, nor did I want to.

Having met a good woman and wanting to quit work gave me the courage to take the plunge and make a big change - moving to the Philippines. Initially this was only meant to be a three month trip with a possible side trip to Australia. Almost 16 months later, I’m still in the Philippines.

I also started thinking about my future. I had an Employer’s Pension Scheme and decided to divest the funds in the Pension Fund. Then a couple of months before I left my job in 2016, I stumbled across a student room lease in the Halls of Residence in Manchester. For less than £20,000 ($27,000), I purchased a lease for 70+ years. In year one it returned over 10%, which was great. Unfortunately, in year two this hasn’t been as successful.

Living simply and being able to invest in rental properties has allowed me to take this mini-retirement. I also have to bring the Universe into this, call this Allah, God, Buddha. I was guided. My finances fell into place when I was ready to leave my job and met someone that inspired me to finally make a change. I am able to live off of my rental incomes right now.

The first few days in the Philippines, I was close to going back to the UK. I had said goodbye to those I love and it was still raw. My girlfriend thought that I wouldn’t even last 2 weeks! Once I adjusted, to the time and sleep, things got better. I was fortunate that once I moved into my new place, that my girlfriend helped me settle in by taking me to a few places to purchase all the things I would need to be comfortable.

I’ve also found that a job gives people stability. It’s like a platform which props people up. Once it’s taken away it does play havoc with one’s mind. Initially anyway. I would have to remind myself why I made this change. My career hadn’t been going anywhere, nor was I passionate about the field. I had felt that life was slipping away. Thinking back to this helped me push through. I so happy being free and have gotten over those initial challenges.

How did your dream evolve or change as you worked towards your goal?

I wanted to take a mini retirement for years and it would’ve been the plan to stay in the UK, however I never pulled the trigger. I think having a partner abroad, pushed me off that cliff. I now had enough of a reason to do it. The location changed to the Philippines and it’s added many more months of retirement than it would’ve had I stayed at home. I believe in the timing of the Universe.

I currently live in a residential neighborhood in Manila, though I have also lived in a condo downtown, near a beach for 2 months, and have travelled to many different islands in the Philippines. My current place costs me less than £20 ($27) a month.

Right now life is simple. I usually wake up around 10am. I do some trading work during the day which can take 10 minutes to a couple of hours a day. Usually I spend 4-6 hours on this per week. In the evenings I spend time with my partner after she arrives from work. Sometimes we go out on a date, or stay in and cook, watch some TV, or play the guitar and spend good quality time together. I was also welcomed instantly by my partner’s family and have now got to a point where I visit them and feel at home.

Weekends are spent with my partner. We usually cook some good meals like Sinigang na Hipon (Shrimp in Sour Soup). We eat a lot of rice, I’ve never had so much in my life. I love their food such as Chicken Adobo, Pancit Canton, Bulalo. Meal times are especially fun, when you have a few people around.

The worries I had regarding my mini retirement have faded. It really just feels normal to me now. My world hasn’t collapsed. I’ve learned how adaptable I am.

I incurred a few unnecessary payments on my car when I decided to move to the Philippines. I tried to sell the car with no success. I wasn’t aware that I could hand the car back to the finance company for a small cost with no further payments. Had I realized this right away, I would have saved myself £1,000 ($1,400). We live and we learn.

What would you say to someone who wants to do what you did? Don’t talk about it, look into it. Sit down and have a look at your financial situation. You already know that you want to take a mini retirement because you are mentioning it.

I would also advise you to speak to a mini retiree and ask them questions. Arming yourself with knowledge and different views empowers us to take the leap. 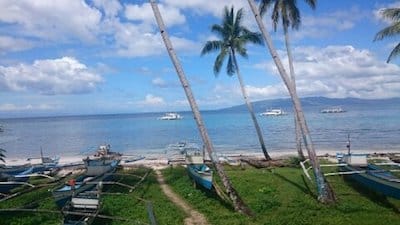 I miss the culturally diverse communities and seasons in the UK. I’d love to travel around the UK in a caravan or a car. Even though I am British, I never explored the UK in depth. I’d love to go to different regions, see new towns and meet local people.

I have not planned this yet as I am still wanting to travel and live in a few places in the Philippines which will take another 5-6 months.

I would once again rent out my houses, or potentially another venture that will help fund a caravan and enough costs to cover food etc.

I would love for my partner to join me someday as I’d like to create a freedom dream together. However I am big believer in the timing that the Universe has. I don’t rush, I don’t worry, I just live and she agrees with that. Who knows, what our lives will be like next year!

Thank you to Mohammed for sharing his story. We love that he learned to live simply early in life and followed his heart to the Philippines. We wish him the best during his mini retirement and can’t wait to hear more about his future caravan plans!